Ronald E. Breaker is a native of Jacksonville’s Eastside.  He served 21 years in the United States Army, retiring as Chief Warrant Officer 2.  Mr. Breaker then served for 13 years as a Department of Defense Civilian, retiring in September 1996 as a GS 13.  He returned to Jacksonville with his high school sweetheart and bride of over 48 years, Barbara Lewis-Breaker.  They currently reside in Historic Springfield.  Presently, Mr. Breaker works as a freelance photographer. He studied photography with New York Institute of Photography in 1965 and University of North Florida in 2001. Ronald and his wife are the proud parents of four children and four grandchildren.

In his own words, Ronald shares his journey towards allyship:

My journey to this point as a straight ally has been one of reevaluating my thoughts and beliefs. When the LGBT community started framing their plight as a civil rights issue I disagreed and would often say, “they choose to be gay, and could stop if they wanted to. Being black is different, I don’t have a choice.”   When I think of people I have known as early as 3rd or 4th grade who were gay, I realized gay people could no more change their identity than I could change mine.

We live in a changing world, and when the military realized that, they knew their policies of discrimination against women and eventually LGBT members of the military had to change.  It is very hard for a lot of us to accept these facts, but I believe, when you know better you do better. To that end, If Jacksonville is to become a first class NFL city it cannot discriminate against any of its citizens. Injustice against one of us is injustice against all of us.

See a video clip of his statement here: 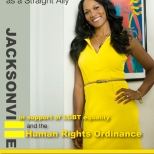 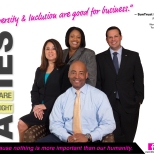 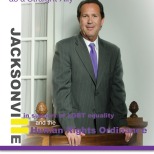 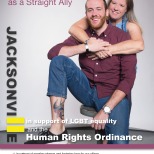